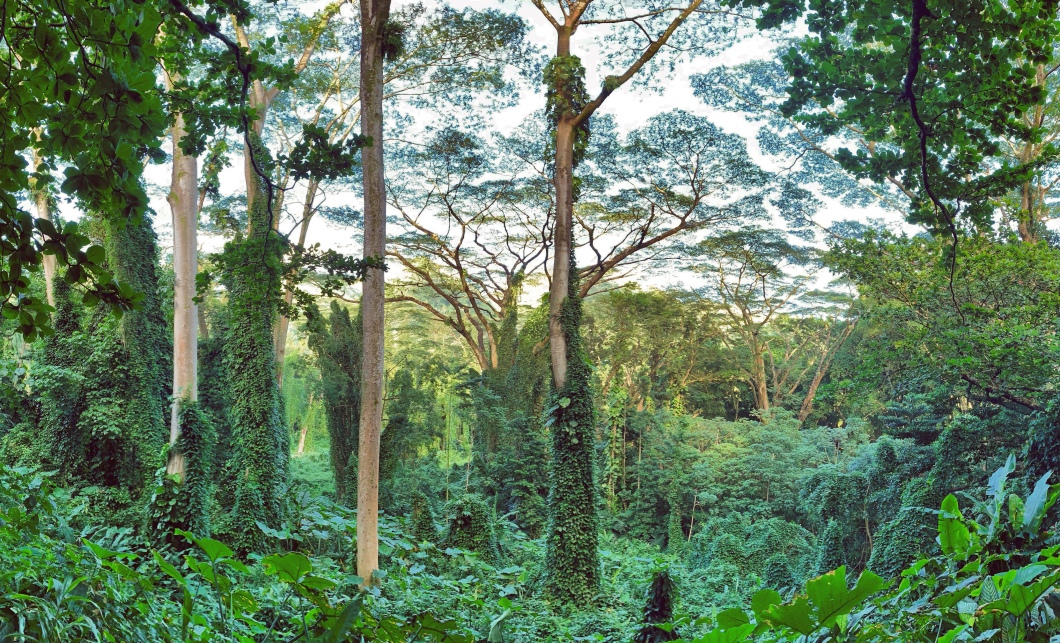 My first mistake was booking two different islands for my first Hawaii experience. My second mistake was squeezing these two islands into a week. However, these mistakes were a direct result of my FOMO (fear of missing out) coming out in full-force, while circulating my entire trip around my one goal: cage-less shark freediving. Hawaii wasn’t ideally somewhere I would normally vacation. I like obscure, off-beat and the least amount of tourists possible. Hawaii was very vanilla for my usual travel locations. However, for $400 round trip for two islands from CA, it was a steal and I jumped on it.

Hawaii ain’t cheap. There I said it. It’s only of the biggest reasons I had yet to go there. So I booked this trip as cheaply as possible…and kinda by the seat of my pants, since this trip was ONLY about the shark freedive experience. I booked a little glamping cabana in Hilo, the jungle side of Hawaii, for a couple nights via hipcamp. For $50/night, I slept in a screened-in cabana in a hammock with blankets and pillows provided while listening to the Jurassic-like sounds of the jungle outside. I had stunning sunsets and sunrises that I could see from a private, outdoor shower. There was a communal kitchen and bathroom not far from my cabana. To be honest, it was quite a cool experience and a tad hostel-like with the communal areas but yet, still having your own privacy in your own cabana. And the sounds of the surrounding jungle at night…WOW! I kept thinking I’d see a velociraptor any moment! My husband and I left the cabana to continue our trip to the Kona side of Hawaii. Wdrove our car rental to Volcano National Park, checked that out for a day and then headed along the northern coast with our snorkel gear in tow. 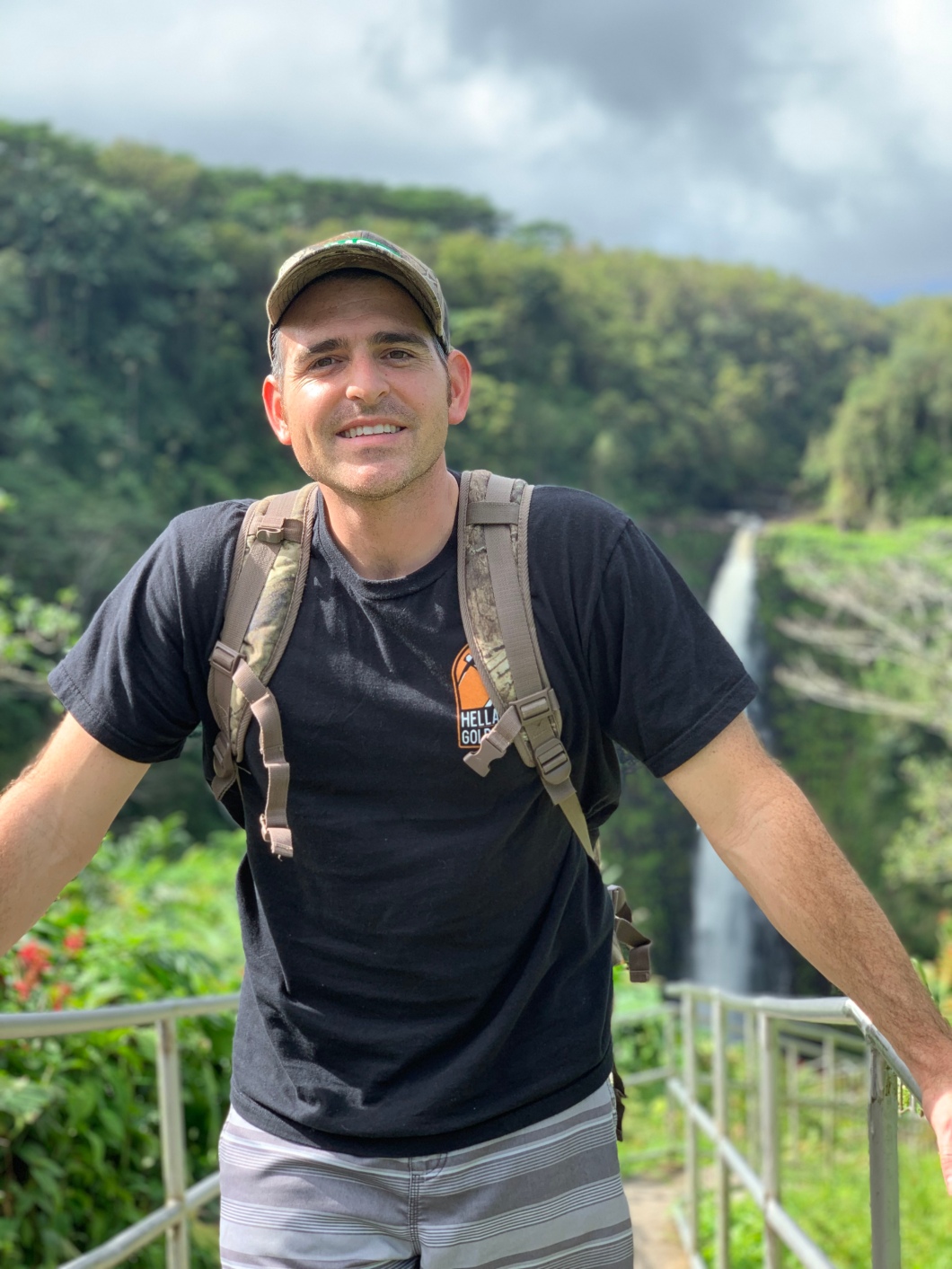 (The handsome hubby at Akaka Falls)

It was a very relaxed drive, pulling off at any beautiful sites as we drove along, headed to our next airbnb in Kona. With our own snorkel gear in tow and weight belts, we also pulled off at any cool coves in which it looked like it could be a neat freediving spot. This was a beautiful little cove that we thought we’d be able to freedive or snorkel. The name of the cove has escaped me now but the surf looked too rough (it was December) and it was going to be several miles of hiking just to reach the cove. Oh well, it made for a pretty picture though. 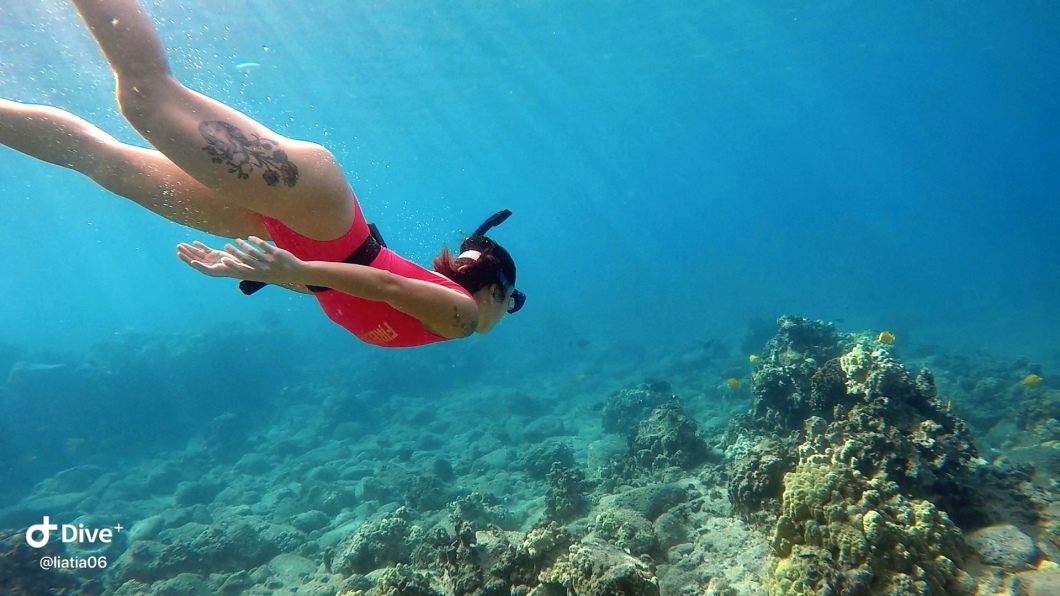 We ended up making our way to a super cool spot on the northern coast of the Big Island called Lapakahi State Park where there were some cool ruins of an old fishing village and a beautiful little cove. We jumped in and I got to swim with lots of tangs and a turtle. We stopped off at one more cove where I got to free dive with a few turtles. The neat thing about carrying your own gear is that you can pretty much free dive any where you fancy without any need to find a shop to rent your gear from. Eventually we made our way to Kona and stayed with a lovely host at the “Megan Love House.” We were greeted with freshly made lavender lemonade water and ended our stay with an unexpected delicious & healthy breakfast before catching our flight to Oahu. 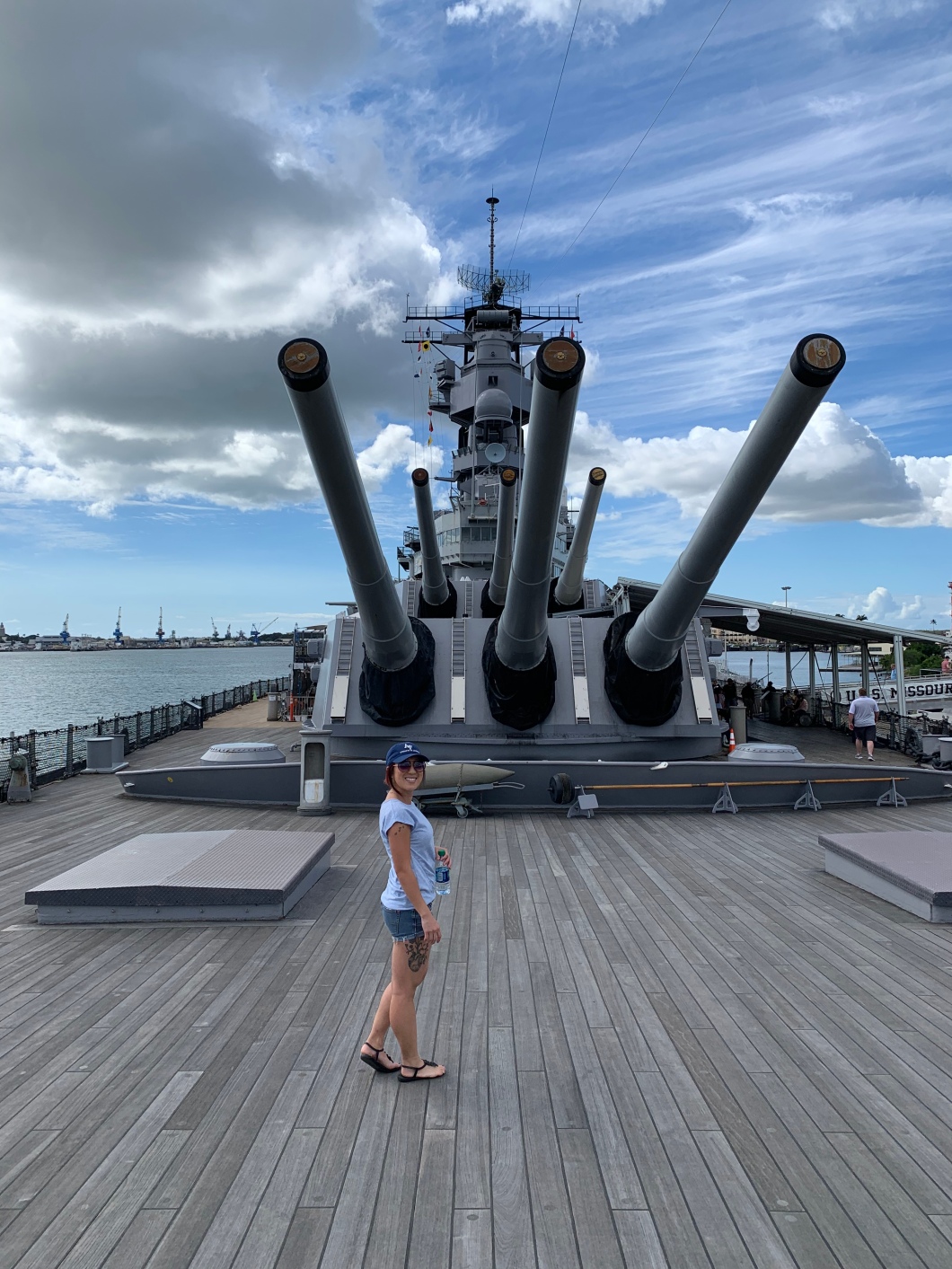 (Standing below the big guns aboard Battleship Missouri)
Of course, what would my first trip to the Hawaiian islands be without a visit to Pearl Harbor? With changing dates on my shark dive (due to weather), we randomly decided to head to Pearl Harbor and see see if we could get into a tour aboard the Battleship Missouri. This beast of a battleship is best remembered as the site of the surrender of the Japanese Empire, ending WWII in Tokyo Bay. Lucky for us, we were the only ones to show up for this sold-out tour and got a personalized tour. 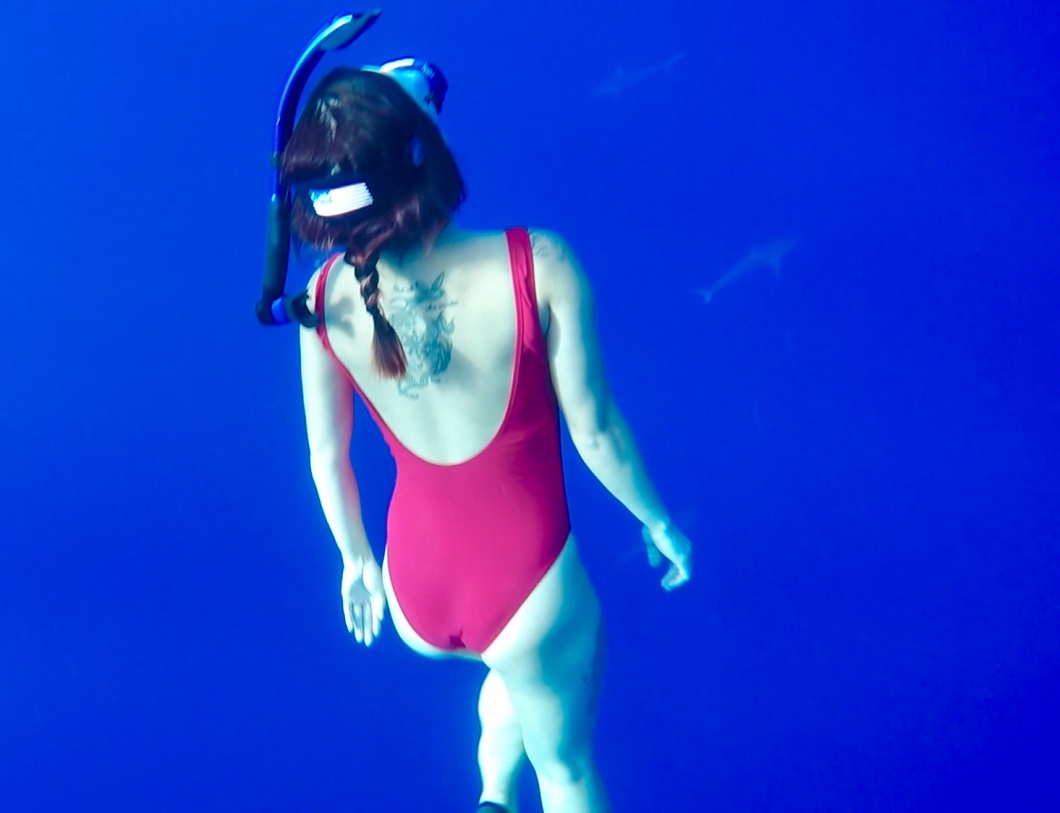 I think sharks are BEAUTIFUL and completely bad-ass. I had always wanted to do a shark dive and I really liked this because it was cageless and they don’t use chum. Also, the company that I used, One Ocean Diving, really worked to change the image of sharks and I liked that they wanted to educate the public to stop villainizing sharks. The second purpose of this dive was in preparation for my orca expedition in Nov 2019.

(There are actually several sharks below. The sharks that you can see and that are closer are the alphas. The alphas come up higher to the surface.)
This really was such an awesome and educational experience. It wasn’t the “scary” experience I kept hearing that it would be. I remember seeing these sharks swimming towards me but feeling extremely tranquil. The calm way in which they glided towards me had no threat or aggression in it. 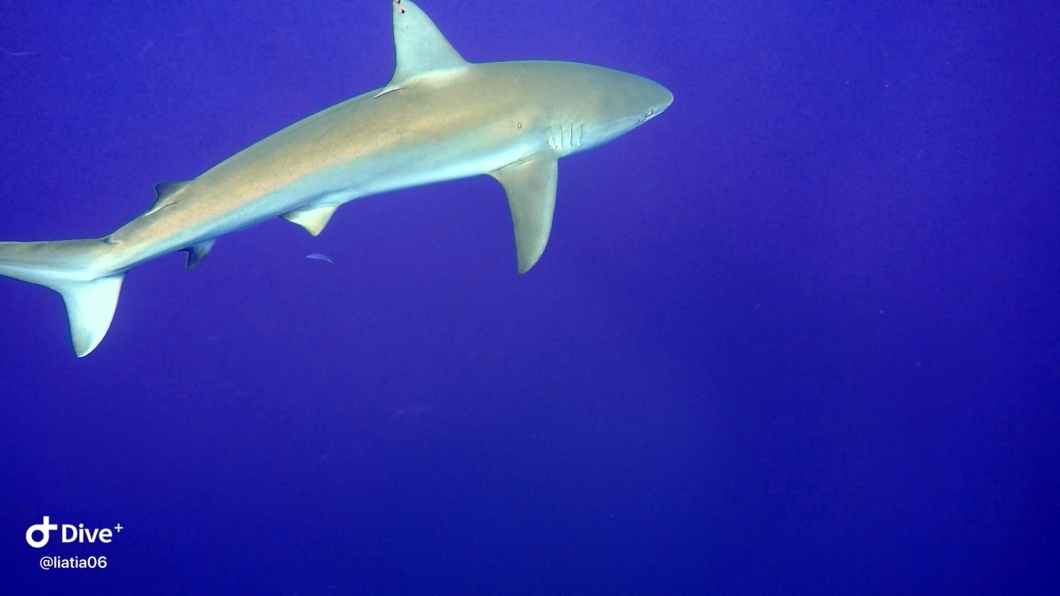 (Galapagos shark gliding near me)

The part that actually got to me was the fact that the closest ocean floor was 400-500ft below. I had always swam with a reef below me– a visible reef. I had only just began to get comfortable in water and now I couldn’t see anything but the deep, dark blue below me. A quote that I found to accurate describe how I felt: “…the bit where the reef ends & it suddenly just drops off & you can’t see the bottom or what’s down there. And you swim over the edge & suddenly you’re in open water… you feel so vulnerable like you’re a fish that lives on the reef & you finally understand Finding Nemo.”

However, with a shark dive and open ocean under my belt, i felt like I could conquer anything. We spent our last night in a fancy (& pricey hotel) in Waikiki before catching our flight out. There was still so much more that I had wanted to experience in Oahu and in the islands in general but this will do for now.