The Bucket of Bucket Lists

Over a year ago, Fall of 2018, I was skimming through a Condé Nast Traveler magazine and came across a small blurb about snorkeling and free-diving with wild orcas in the fjords of Norway. I almost fainted. Seeing orcas in the wild has always been my ultimate bucket list item ever since Free Willy made it’s debut in 1993 when I was a wee bitty thing (I know, hard to imagine me tinier than I already am). I had only ever wanted to see them from a boat, but swimming with a wild orca?!?! I. Had. To. Go. Never mind that I would be swimming in northern Norway in winter. 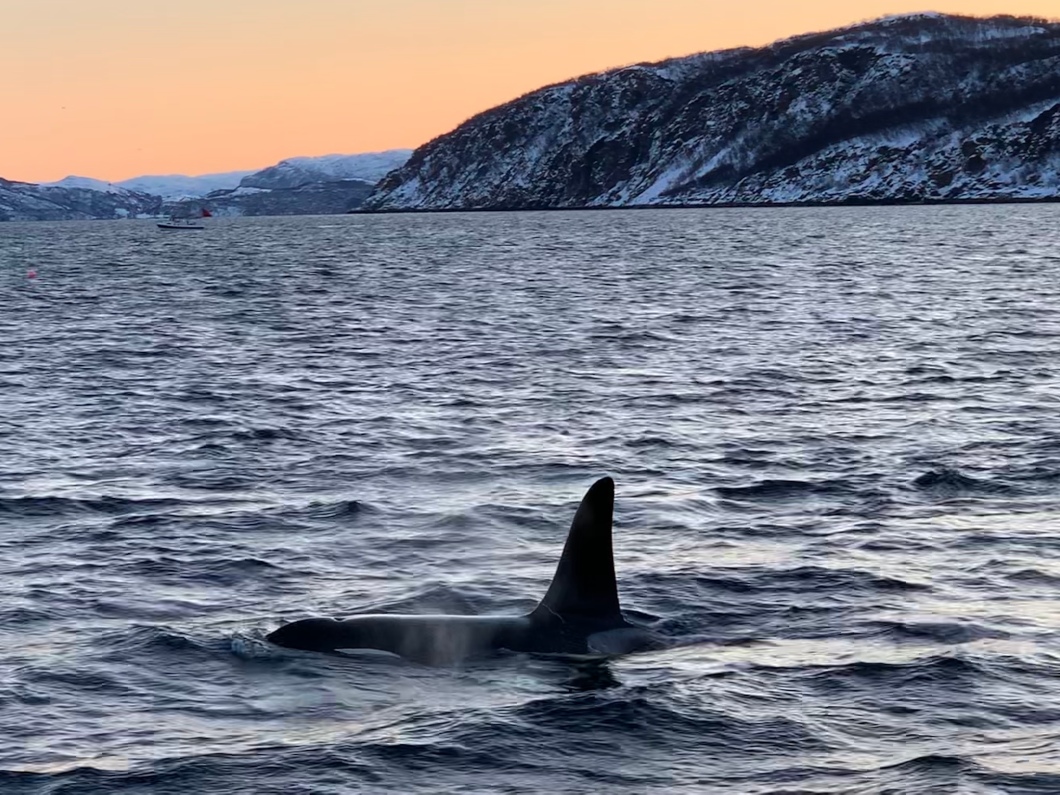 (Up close and personal from our Zodiac boat, photo courtesy of my friend Uwe Schwarz)

I read that little article over and over again, then I googled the company they mentioned, Northern Explorers.  After seeing the pricing, ~$3k for a weeklong expedition, I decided to google other companies that also provided orca snorkeling tours because I like to fancy myself a pretty good bargain traveler. However, after exploring different options and companies, I decided to stick to Northern Explorers because 1) They were mentioned in Condé Nast Traveler and that means they must be, at the very least, adequate, 2) I liked that you did not live aboard the boat because I can’t imagine my stomach would be able to handle it and 3) They are supporters of the Norwegian Orca Survey, a NPO dedicated to orca research and conservation group. To me, that meant that the expedition would be respectful about their approach and tactics in regards to the whales. Most times, you get what you pay for so I decided not to go cheap.

I booked the expedition and then told/invited my husband. His response: “No, sounds cold” and “you can’t swim.” Now let’s address that latter part. I technically can stay afloat and not drown but, yes, I had always had a terrible fear of water and had never even been able to get myself comfortable enough to learn how to swim in a pool (trust me, I’ve tried several times). I didn’t grow up near water. My parents did not take us to the beach or lake. We were never well-off enough to own a pool. BUT I WAS HELL-BENT ON SWIMMING WITH ORCAS. So every vacation I booked from that moment on was water-based so as to reach my end-goal. In less than a year I squeezed in Roatan, Hawaii, US Virgin Islands and British Virgin Islands. (You can read a more in-depth account here about my journey). 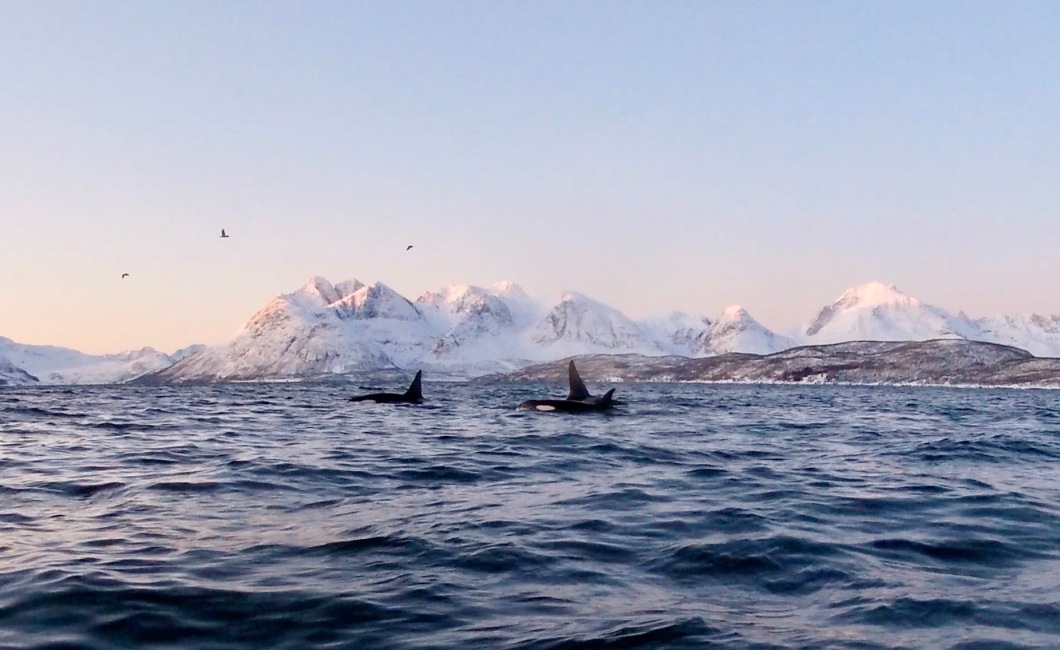 One year later, I eagerly showed up in Sorkjosen, Norway with my own gear, 7mm wetsuit, hood, boots, gloves, weight belt, mask, fins and snorkel, ready to board the MS Sjøblomsten , a former whaling boat, with Northern Explorers.

Let me tell you: no amount of preparation, freediving, yoga breathing, open-ocean swims could have prepared me for this moment: the moment when you slip off the zodiac boat into the frigid waters with orcas. Even in a wetsuit, I hardly noticed the 41 degrees F, because my heart was beating out of my chest. 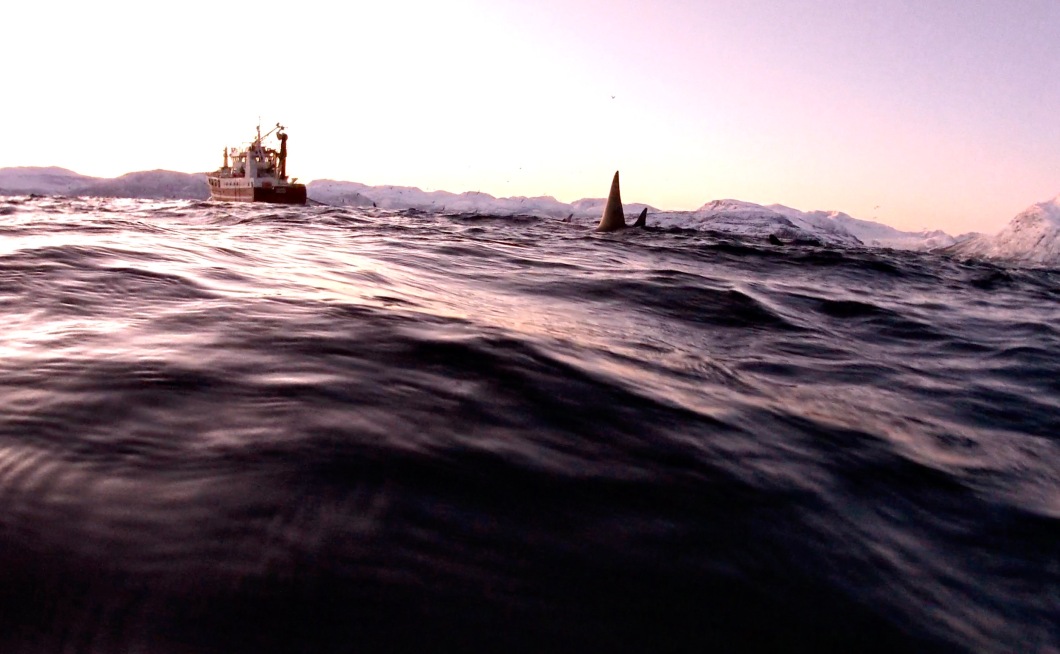 (Shot of a pod of orca fins coming towards me while in the water. Taken with my GoPro Hero 7 Silver)

How does one put something like this into words? I’m not sure there are words in our vocabulary nearly adequate enough for experiences such as this. I’m not sure if I was breathing. My brain stopped functioning. For a second, I froze, and it wasn’t from the 30 degrees in the air. I was surrounded by wild orcas. Everything I had worked so hard to learn about breathing and free diving completely slipped my mind. I’m not sure I could even use my fins properly anymore. My heart was beating so incredibly loudly into my ears that I’m sure it wouldn’t take any echolocation for orcas miles outside of the fjord to find me. I was awestruck to share the same space as these “wolves of the ocean.” 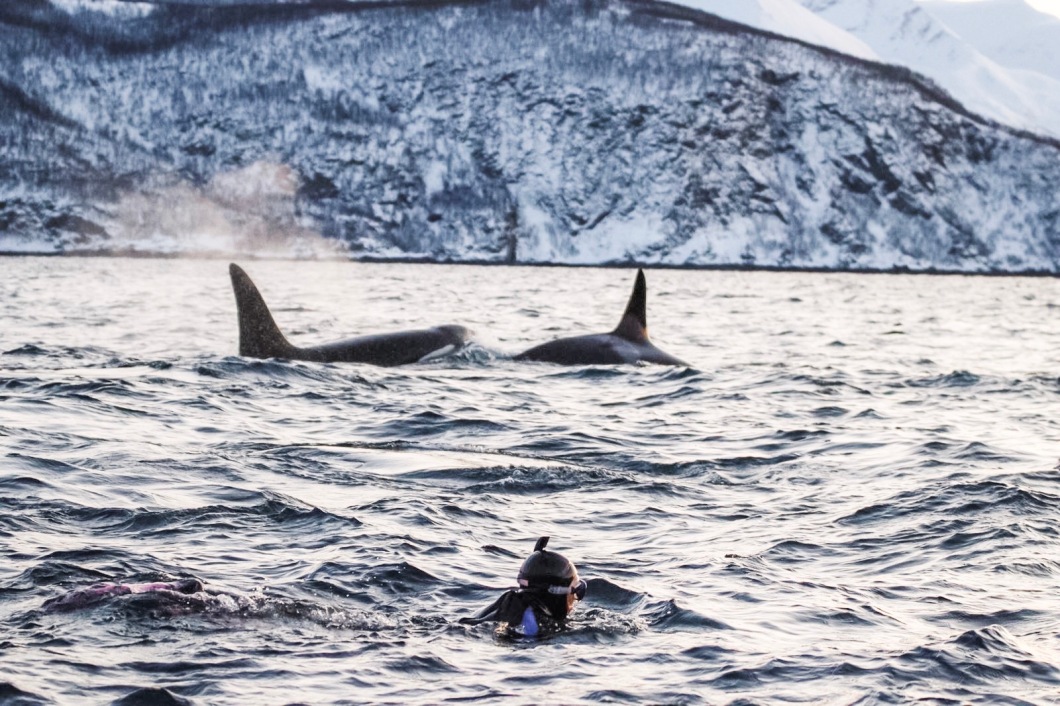 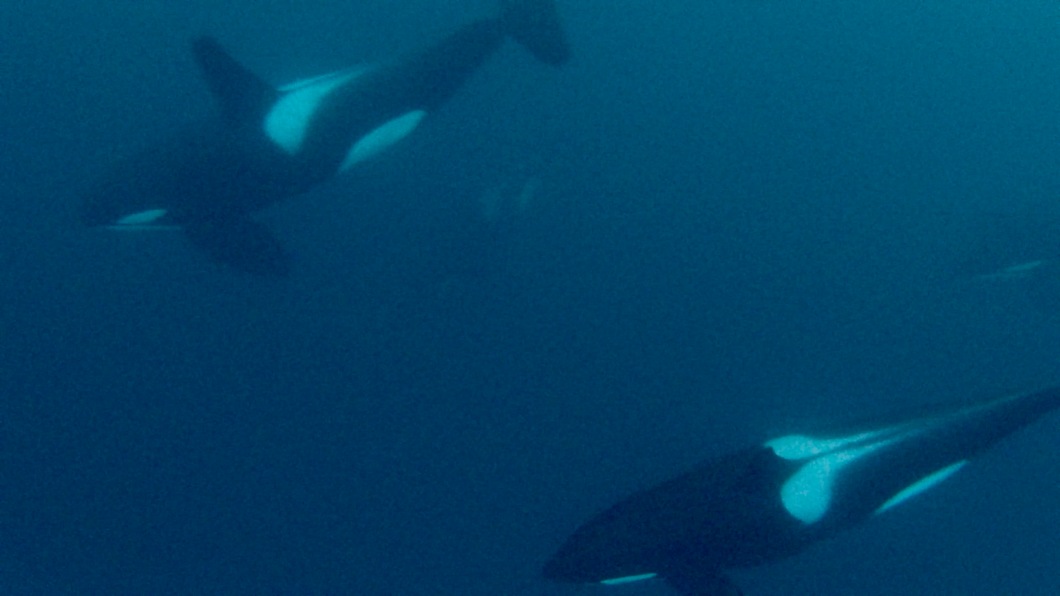 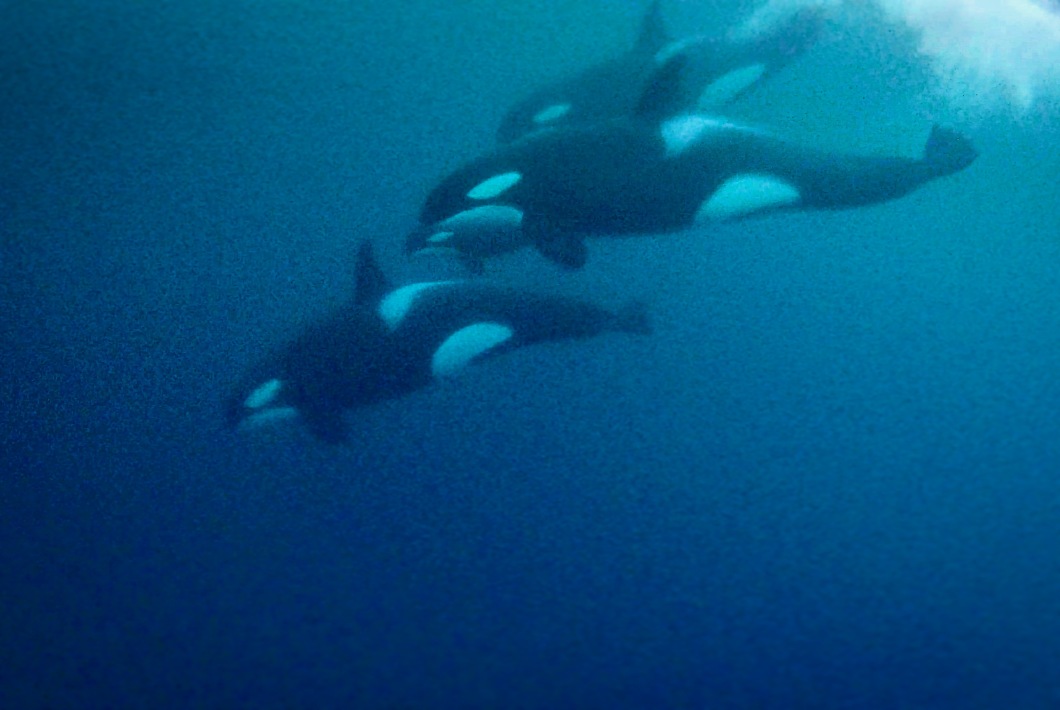 The beauty and majesty of these apex predators were even more magnified when you’re in such close proximity. I was completely humbled. 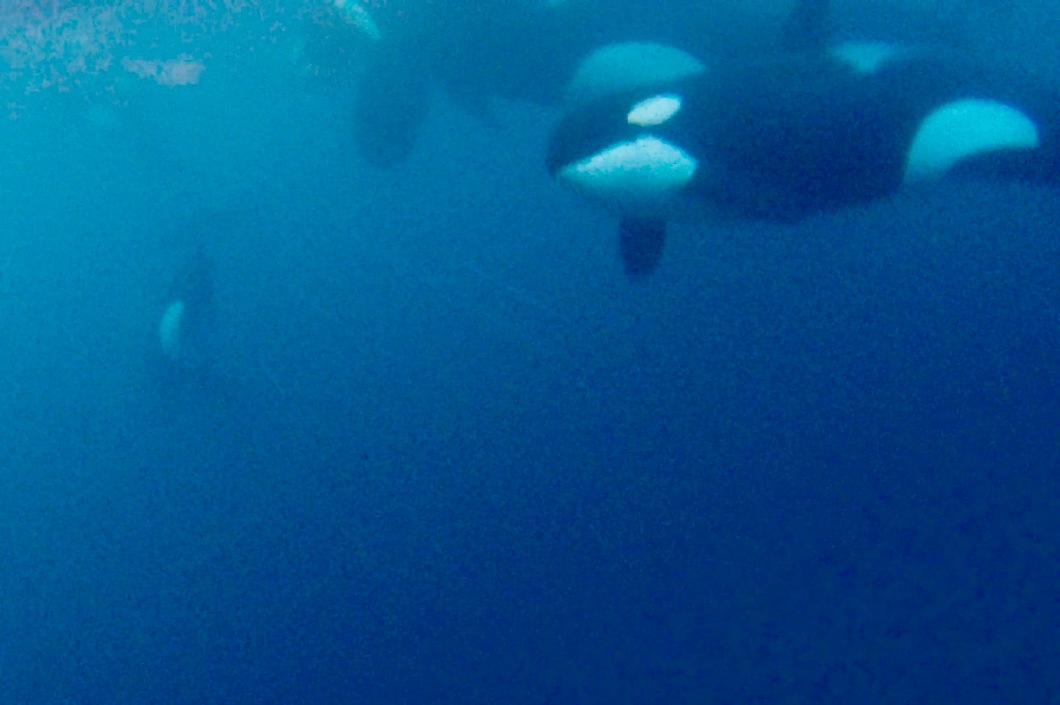 My first wild orca. I saw his fin above the water & immediately ducked my head underwater. And there he was. And here I was. No more than 10-15ft away. No glass to separate us, no cage, no prison. I fumble for words, even now. My heart was pounding into my ears. The way he turned to peer at me, making eye contact, suspended me where I was. It was a brief moment between us, but it felt like an eternity with nothing but my heart beating out of my chest, my lungs screaming for air and the deafening calm & quiet ocean around us. For a moment I hesitated to swim after the pod, but his stare seemed to beckon me to follow. So I did. This pod ambled along casually, slowly. They could have easily out-swam me. It was like my body didn’t know to function anymore. I forgot how to gracefully kick my fins. My lungs were burning. But yet, the pod allowed me to keep up for the last few seconds that I still had the capacity to hold what was left of my breath— in no apparent rush to be rid of my clumsiness.

The gracious pod allowed me to keep up with them for a full minute. I say “allowed” because if they want to, and they USUALLY do, they can disappear into the depths of these fjords with a simple flick of their caudal fins. Not only did they allow me to keep up with their pod, a couple of the orcas (maybe the same one that I had a moment with) would turn around to come check me out. Possibly wondering if I’m an emaciated stray orca calf? Or maybe a delicious morning snack? This was nothing like my past, desperate attempts to keep up with a gliding eagle ray, zipping through the water, barely able to catch a glimpse. This was the slow drift of an apex predator, so casually cool & content in their surroundings, graciously allowing itty bitty me to follow behind the pod. 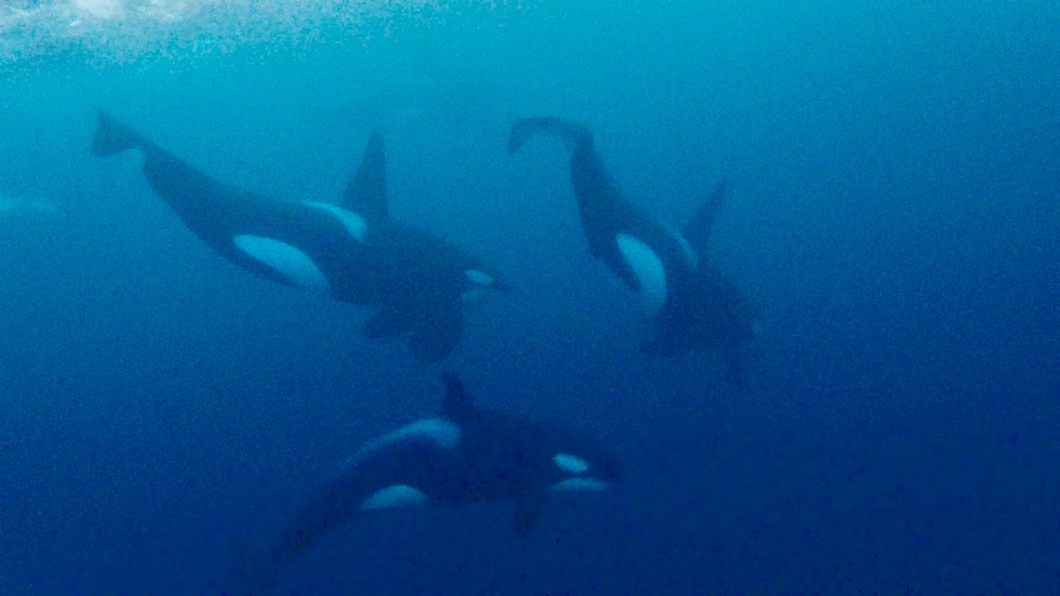 I cannot recommend this experience and the company, Northern Explorers, enough. The co-owners, Sven and Anja, do a wonderful job with the tour. They even take out National Geographer photographers, researchers and marine biologists with their company (on a separate, smaller vessel). The neat thing is that they can usually finagle a couple of them to give educational talks to the tour group with their amazing photography included. 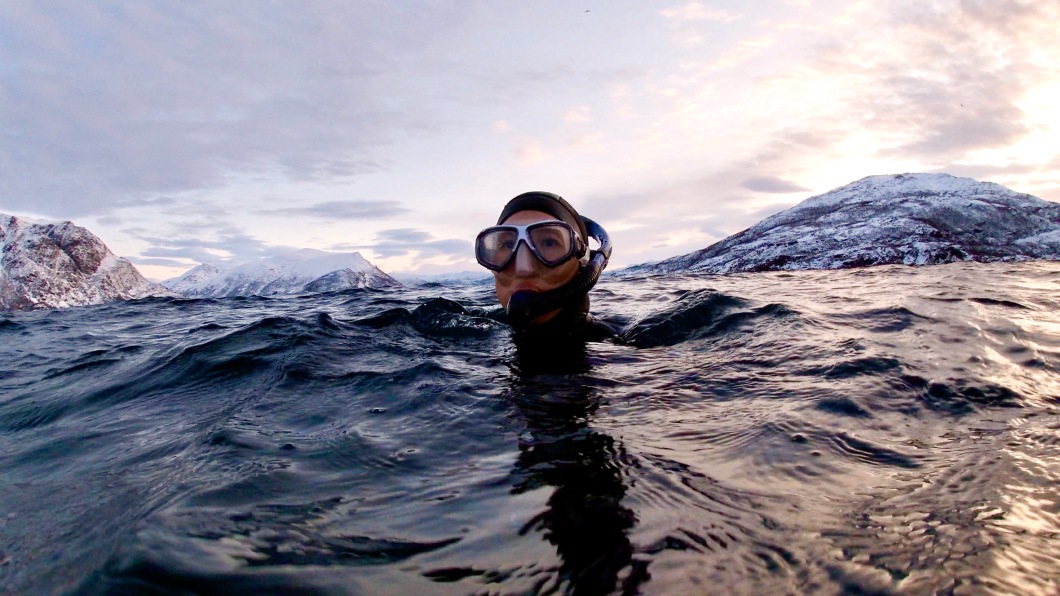 Side note: This photo is more accurate than the rest.
•First of all, wetsuits are not attractive
•There are NO whales around me. In fact, I’m wondering where TF they went. I could have sworn I saw their fins as I jumped in but now I’m all alone.
•The water is becoming more choppy & rough. It can make you seasick.
•You can’t see it, but I’m extremely tired and out of breath from swimming around in the arctic waters.
•The sun has already begun to set & its barely noon. (Winter in the Arctic Circle = less sun)
•I’m dreading getting out of the water because the air temp is about 28F.

These are the harsh realities of trying to swim with wild orcas in the beautiful fjords of northern Norway. Sometimes, there’s no action. Sometimes you get in and they have disappeared. You may not get close encounters. Some days you don’t get whale encounters at all. That’s the point: it’s wild, they are free, nature is unpredictable. That’s the beauty of getting a close encounter.